The Gavox Aurora went to meet the Aurora Borealis this winter.  I Created this watch to be a one of a kind Wristwatch with a few innovations of my own. Due to the research i put in this watch and of the fact that it is a watch made for pilots and astronauts, I named this watch Aurora. Also the Luminescent Dial and Hands remind the colors that can be created by these lights. ( An aurora, sometimes referred to as a polar light,)

When my good friend, Stephan from www.mynoise.net decided to go to lapland with his son end of December 2015, I knew he would have the possibility to encounter Northern Light (Aurora Borealis).

I challenged Stephan to take a picture of his Gavox Aurora showing both the watch and the Sky with a Aurora. You need to know that on that day the sky was cloudless, the temperature was freezing -14°F (-26°C ).  Due to this cold, his Iphone and the Autofocus of his SLR camera Stopped working. The picture above needed a lot of trial and error to make sure the focus was right and this is very dim light.  This shot needed a pause of 8 Second to get enough light.

Stephan told me that the cold was so intense that while making sure the shot was right, his finger appeared to be “Frozen”,  “I can’t move my finger anymore”. After some time under fresh water the feeling came back. 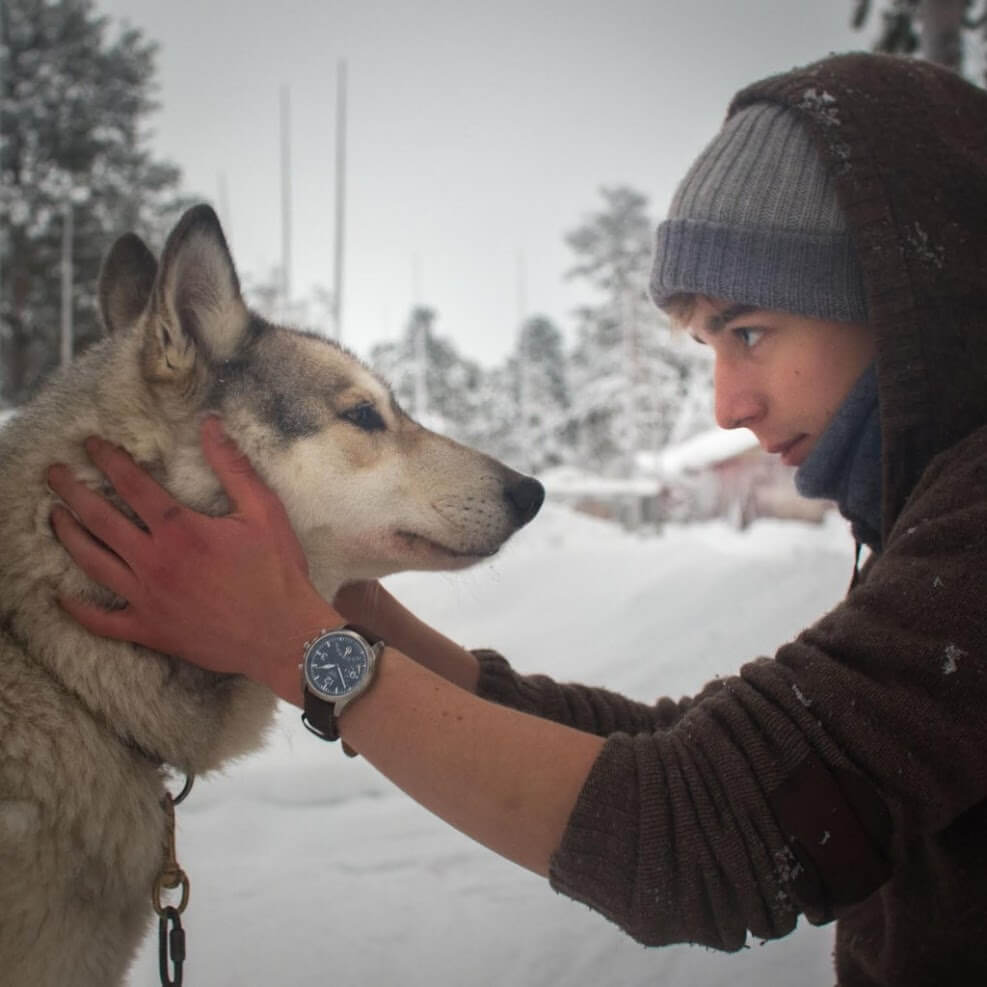 Merry Christmas 2015 to all of you from the country of Father Christmas.

Here Stephane’s Son is taking care of his sledge Half Wolf  – Half Husky dog. You need to know that these half breed dogs makes them tough for the weather condition and also easier to train.

Many Thanks to Stephane and Remi for the fantastic pictures

Check out the Work Stephane does, it is simply magical and immersive.

As quick as it’s commenced, it can be over. That’s why you must prepare and be ready when trekking out to photograph the Aurora borealis.

In this article, I’ll show you how to photograph the northern lights step by step, from planning, what equipment to use, and getting all the settings ready.

END_OF_DOCUMENT_TOKEN_TO_BE_REPLACED

Gavox Watches deserved a Catalogue After 8 years of making watches, We compiled here all the products and projects done over these 8 years You can view it online or even download it GAVOX catalogue 2020 Enjoy Mike

END_OF_DOCUMENT_TOKEN_TO_BE_REPLACED

On this week’s episode of The Worn & Wound Podcast, we talk to Michael Happé, the proprietor of Gavox. Founded in 2011, Gavox is a micro-brand that goes back to the early days of Worn...

END_OF_DOCUMENT_TOKEN_TO_BE_REPLACED

Win a Gavox Aurora and HD files of your Deepart work.

Dear Customers, Friends, Visitors   Contest is Over Here are all submissions : https://spark.adobe.com/page/fhILE/   Winners Images are:   You have the chance here to win a Gavox Aurora and Some Deepart.io HD files of your realisation. (Rules of the contest will...

END_OF_DOCUMENT_TOKEN_TO_BE_REPLACED

Turkish
Select your currency
EUR Euro
USD United States (US) dollar
Scroll To Top Sidebar
We use cookies to ensure that we give you the best experience on our website. If you continue to use this site we will assume that you are happy with it.Ok
We use cookies to improve your experience on our website. By browsing this website, you agree to our use of cookies.
Accept